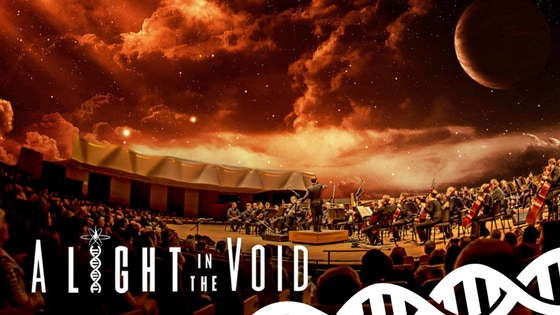 A Light In The Void: LIVE Concert & Broadcast event

Latest Updates from Our Project:

We’ve mastered the video, killed all the bugs we ran into during export (believe it or not, Tony has officially migrated to PC from MAC because of these bugs), and we successfully uploaded our Master Cut for all of you to enjoy! All backers at $25 level or higher should be receiving a link to stream and download the show on our private Vimeo page over the next few hours.  This digital release version is SO MUCH more than the version we streamed live on Twitch. It is fully re-mastered video, jam packed with never-before-seen animations, graphics, and documentary sequences. This version is for YOU, our beloved backers, who made this dream come true!

We're still hard at work to bring LITV to your local symphony; we've got a handful of future performances lined up, and more hopefully to come. We’ve learned so much about the live-performance industry, including, the promising fact that shows like LITV grow organically over many years and tend to stick around when they develop a strong following. This means that if we can continue to book engagements, we will be in a great position to sustain the reach of this show.

Our dream is that EVERY BACKER will have a chance to see this show LIVE in their hometown! We’re working like crazy to make that happen.

Also, we have more digital prizes to roll out, including BONUS PRIZES for our backers that we never announced. For example, how would you like to see the show in 360 VR, shot from the POV of a musician on stage?? Well, you’re going to find out in 2020 thanks to a VERY generous gift from one of our backers!

We cannot thank you enough for being on the ground floor with us for the inception and initial execution of this project. To put this into context… two of our biggest heroes are Lin Manuel Miranda and the writing-directing-songwriting team of Trey Parker and Matt Stone and Bobby Lopez. Both created original live theater shows from the ground up that are huge influences on us (Hamilton and The Book of Mormon) and both projects germinatedin workshops for YEARS before they ever saw a full-size audience.

Because of your support, we’ve been be able to fast-track this process. So just one more enormous THANK YOU from us both.

The world is dark and terrifying…

...but Science shines on as A Light in the Void.

We bid farewell 2019; it's now been just over a year since the LITV world premiere and rapidly approaching 2 years since the start of the Kickstarter campaign. As the year closed, we had 2 main goals: 1) Finish off the outstanding Kickstarter rewards, and 2) prepare the show for its next life-phase.

For the first, we are damn close, but sadly we didn't complete that goal entirely. For those still awaiting things, thank you for your enduring patience. We know it's frustrating but please be assured you are not forgotten nor taken for granted. The fact of the matter is that we are 2-person team who have to simultaneously juggle our careers, and earlier this year when one of our team members decided to essentially betray us, then hit the road, it left us a bit unprepared for the mop up. We've since recovered, but  behind schedule. Most everyone should've gotten the basics and in the coming weeks of January, the rest will be sorted. At that point, ALL will be fulfilled and it'll be entirely about ....

Item 2! The future of LITV. So far, as expected, we've run into a lot of challenges with commercializing the show. We know it's somewhat niche and that orchestras are generally VERY risk-averse, and that combo has led to a lot of interest/meetings, and very few closings. We were prepared for that, but it's still meant that we also are devoting a lot of time to re-tooling the show to be more flexible. We're happy to say that at least a couple more performances are on the way, though on a vastly smaller scale than what we did in Colorado. We'll send notices of those when the time is right.

Thank you again for your patience, support and generosity. This show has been a dream, even if a daunting one periodically, and we remain ever-aware that it's only because of you all that it happened.

Onward to 2020 and the next horizons!

We've become aware of an issue with our CRM (Backerkit) and suspect there MAY be a few dozen orders of the CD that haven't been fulfilled yet. Unfortunately, Backerkit is the most non-userfriendly, non-intuitive system you can imagine, but we're working hard to make sure every order is properly fulfilled. We'll let you know when it get resolved. Drop us a line on this thread or at info@lightinthevoid.com if you had any problems in getting your signed CD.

Now, back to the video editing bay with us...

If you got the "Austin Wintory Games Package" reward, then we're happy to announce that we've completed distribution of this reward with the addition of The Banner Saga 1, 2, & 3! Let us know if you have any trouble unlocking the game!